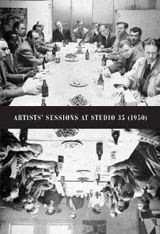 In April of 1950, about two dozen of the artists who came to be known as the Abstract Expressionists met for a series of discussions about their own work as well as about the modern scene. Nearly 60 years after the actual meetings took place, the transcript of “Artists Sessions at Studio 35 (1950)” still pulses with the heated discussions around basic artistic issues like titling, process, relationship to history, community, and professionalism. Often referenced, but rarely fleshed out, this series of closed meetings allows readers fly-on-the-wall access to the artists’ discussions.

Robert Goodnough (1917-2010) earned his BA in fine arts from Syracuse University in 1940, but became aware of modern art by reading magazines while stationed in New Guinea during World War II. In 1946, Goodnough moved to New York City and attended the Amédée Ozenfant School of Fine Arts under the G.I. Bill; he also studied at Hans Hofmann’s summer school in Provincetown, MA. In 1950, he earned an MA in art from New York University. Goodnough credited his teacher, the architect and sculptor Tony Smith, with opening the door to the New York avant garde. On Elaine de Kooning’s recommendation, he wrote art reviews and feature articles for ARTnews from 1950 to 1957. Goodnough created and exhibited work, which “exploited the tension produced by explosive energy held in check by a solid structural framework,” for over a half-century; his first one-person exhibition took place in 1950 followed by solo exhibitions at the Art Institute of Chicago (1960 and ’61); the Whitney Museum of American Art, the Albright-Knox Art Museum (1969); and the Neuberger Museum of Art (1999). His work was shown in major group exhibitions, including The Art of Assemblage, MoMA (1961– 62) and the 1970 Venice Biennale, and it is in the collections of major museums, including MoMA; the Metropolitan Museum of Art; the Solomon R. Guggenheim Museum; the Smithsonian American Art Museum; the Art Institute of Chicago; the Chrysler Museum. Goodnough’s work is held in many private collections, and his public art is in the the Manufacturers Hanover Trust Building in Manhattan; Chappaqua Library in Chappaqua, New York; and the Ossining, New York Metro North station, among other locations. Over the years, Goodnough’s work has been represented by galleries including Tibor de Nagy Gallery (NYC); André Emmerich Gallery (NYC); Harcus Krakow Gallery (Boston), Katharina Rich Perlow Gallery (NYC), and Margot Stein Gallery (Lake Worth, FL).