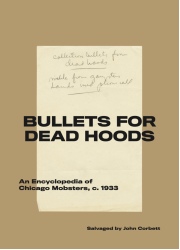 Bullets for Dead Hoods:
An Encyclopedia of Chicago Mobsters, c. 1933

In the early 2000s, writer, curator, and gallerist John Corbett struck thrift gold at a going-out-of-business Chicago junk shop when he stumbled onto a browned and brittle manuscript intimately documenting the Chicago mob of the early 1930s. The tone of its typewritten and hand-annotated pages immediately grabbed him—sensationalistic and funny, they read like an embellished police blotter, naming names, listing addresses, and recounting crimes.

Presented here in facsimile in order to capture the dossier’s distinctive materiality, Bullets for Dead Hoods: An Encyclopedia of Chicago Mobsters, c. 1933 offers a detailed rundown on the Chicago Outfit through 140 noir character sketches, which range from the infamous—Al Capone, George “Bugs” Moran, the Everleigh Sisters—to their lesser known aiders and abettors. Whoever dared to put this testament together was clearly someone with access to information—a cop? a reporter? a bitter mafioso?—but who would’ve risked sharing these particulars, and why, is a mystery that will likely never be solved.

In addition to the full-color manuscript, Bullets for Dead Hoods includes related documentary material, an introduction by Corbett, a compilation of more than 400 locations referenced in the manuscript, and a pull-out map of Chicago that pinpoints over 300 street addresses.

John Corbett is the author of many books, including, most recently, Pick Up the Pieces: Excursions in Seventies Music (2019) and Vinyl Freak: Love Letters to a Dying Medium (2017). He has edited, co-edited, and contributed to dozens of books and catalogs on artists and musicians, and his writing has been published widely in magazines and journals. As a curator, Corbett has been involved in major museum exhibitions, and he has organized music events and festivals both nationally and internationally. He has produced music events since the ‘90s in Chicago, where he is co-owner of the gallery and music label, Corbett vs. Dempsey.

[Bullets for Dead Hoods] is a combination of history, puzzle, narrative and work of art, and every time I’ve picked it up since its arrival, I find a grin on my face. –—John Warner, Chicago Tribune

The period language, the extensive set of bad guys and gals and the amazing nicknames makes this a recommendable text.... ——L.D. Barnes, Newcity