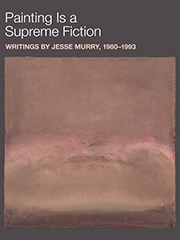 Painting Is a Supreme Fiction presents the writings of artist and poet Jesse Murry (1948-1993), an extraordinary thinker who believed in the capacity of painting to hold the complexity of human meaning. This unprecedented collection brings together his published art criticism with previously unpublished philosophical writing and poetry from 1980 to his tragic death from AIDS-related illness at the age of forty-four. The result is a portrait of an original mind which sought to unite the histories of Romantic landscape painting with the realities of Black experience through “a belief in the restorative and creative powers of the imagination.” In addition to Murry’s writings, this volume also includes reproductions of selected works; excerpts from a a pair of panel discussions on art criticism and expressionism that took place in 1980; as well as transcriptions of two of the artist’s notebooks, in which the spatialization of the words across the page approaches the condition of thought. Painting Is a Supreme Fiction presents Jesse Murry in his own words, offering intimate access to this remarkable figure.

Jesse Murry (1948-1993) was born in Fayetteville, NC and raised in White Plains, NY. He attended Sarah Lawrence College where he studied art and philosophy. Following his graduation in 1976, Murry moved to New York City and immersed himself in the contemporary art world. His essays on artists such as Hans Hofmann, Howard Hodgkin, and Elizabeth Murry appeared in a range of publications and catalogues, including Arts Magazine. In 1982, he curated the exhibition, Reverend Howard Finster, at the New Museum. After two years of teaching art history at Hobart and William Smith Colleges, Murry enrolled in the Yale School of Art at the age of thirty-six, where he was a student of Andrew Forge, Jake Berthot, and Harold Bloom. Murry received his MFA in 1986 and staged his first New York solo exhibition at Sharpe Gallery the following year. In 1983, he was awarded a Mellon Individual Project grant and in 1988, a Pollock-Krasner Foundation grant. Despite the budding success of his work in the final years of his life, Murry’s work has rarely been exhibited since his death in 1993 at the age of forty-four. Clay Hapaz curated Radical Solitude at Tibor de Nagy Gallery, New York, in 2019, Murry’s first solo exhibition in thirty years; this was followed by Jesse Murry: Rising at David Zwirner, New York, co-curated by Lisa Yuskavage and Jarrett Earnest in the fall of 2021.
Jarrett Earnest is the author of What it Means to Write about Art: Interviews with Art Critics (2018) and editor of the volumes of Hot, Cold, Heavy, Light: 100 Art Writings 1988–2017 (2019) by Peter Schjeldahl and The Young and Evil: Queer Modernism in New York, 1930–1955 (2020). Earnest curated the exhibitions Closer as Love: Polaroids 1993–2007: Breyer P-Orridge at Nina Johnson, Miami (2019), as well as The Young and Evil (2019) and Ray Johnson: WHAT A DUMP (2021), both at David Zwirner, New York. His writing has appeared in books and magazines around the world, including recently on designer Willi Smith (Cooper Hewitt, Smithsonian Design Museum), painter Tabboo! (Gordon Robichaux/Karma), and sculptor Tim Whiten (University of Colorado, Boulder).
Hilton Als became a staff writer at The New Yorker in 1994 and a theatre critic in 2002. He began contributing to the magazine in 1989; prior to this, he was a staff writer for the Village Voice and an editor-at-large at Vibe. Als edited the catalogue for the 1994–95 Whitney Museum of American Art exhibition, Black Male: Representations of Masculinity in Contemporary American Art, and his first book, The Women, was published in 1996. His most recent book, White Girls, a finalist for the National Book Critics Circle Award and the winner of the Lambda Literary Award in 2014, discusses various narratives of race and gender. He won the Pulitzer Prize for criticism in 2017.

Reading Painting Is a Supreme Fiction is a profoundly moving experience, as is looking at a Jesse Murry painting—such is the effectiveness of his communication with paint and with words.  —Sheryl Oppenheim, BOMB