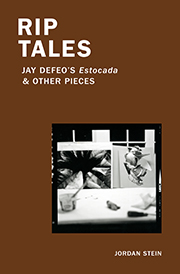 In 1965, Jay DeFeo (1929–89) was evicted from her San Francisco apartment, along with The Rose, the two-thousand-pound painting that would make her legendary. The morning after her front window was sawed open to make way for the colossus, DeFeo attempted to salvage Estocada, a large-scale painting on paper stapled directly to her hallway wall. Unfinished and never documented, the little-known piece—a kind of shadow Rose—was ripped down in chunks, saved, and reanimated years later in the studio through photography, photocopy, collage, and relief.

Jordan Stein is a curator and writer based in San Francisco. With Will Brown, he is the author of Bruce Conner: Brass Handles (J&L Books, 2016), and with Jason Fulford, he coedited Where to Score (J&L Books, 2018). He has organized exhibitions at venues including the Berkeley Art Museum and Pacific Film Archive, Artists’ Space, the Renaissance Society at the University of Chicago, Matthew Marks Gallery, and many others. In addition to working independently with institutions, he operates Cushion Works, an exhibition and program space in the Mission District.

Rip Tales is so self-assured, heartfelt, and consistently touching, funny, and brilliant, that its various intimacies and ideas feel like a gift. And they are. A deeply moving debut. —Hilton Als, author of White Girls


An ode to San Francisco and its artistic ecologies, Rip Tales provides a hugely compelling treatise on art as pursuit (one that often comes to naught) and conversation (balm passed between fellow believers that assuages that knot). Beautifully designed and illustrated, the book’s idiosyncratic structure unfolds with a lovely momentum, and the chapters alternate sinuously between DeFeo and others, a heady experience that’s nevertheless led by heart. Stein comes into focus by what he focuses on, a rare feat in an era of auto-fictionalizing, and he’s produced the most pointed yet helpful commentary to have been written on so many of these artists, most of them elusive. With Rip Tales, he pulls the ripcord, parachuting anyone who cares about art into a more tonic intellectual zone. —Bruce Hainley, author of Under the Sign of [sic]: Sturtevant’s Volte-Face
Rip Tales is a refreshing, necessary reminder that art can be “always on its way,” unclear and uncategorizable even to its maker. —Sarah Hotchkiss, KQED
Stein's slim, provocative book presents DeFeo in a format almost as revelatory as the artist's body of work. —Lou Fancher, East Bay Express
Stein’s achievement lies less in having discovered or reconstructed an unknown artwork, but rather in so successfully piecing together its scattered representations, found among and within obscure artworks and DeFeo’s countless photographs of her studio. —Chris Murtha, art-agenda
Rip Tales is so successful because it is expansive——reaching far beyond the frame of its initial terms. —Leigh Gallagher, Full Stop
As Stein seeks to uncover coinciding hidden histories, he points to the broader philosophical implications that can be drawn from the experiences of artists who are not easily discouraged.... —Maymanah Farhat, The Brooklyn Rail
Rip Tales offers an intimate look back at significant works by San Francisco artists of recent decades. —Patrick James Dunagan, Rain Taxi
Rip Tales breathes a sense of ferment: Jay DeFeo and others taking in the Bay Area air and breathing out not just pieces of art, but ideas, fragments, throwaways—stuff for which there was no market. That some of it is here in this book is a lucky break. —Greil Marcus, writer and cultural critic
Nothing short of a remarkable account of what it is to make and write about art in the magical world of the Bay Area. Stein listens closely, looks slowly, and writes clearly and with feeling not only about DeFeo, but on the other artists he attaches to her orbit. —Elizabeth Sussman, Sondra Gilman Curator of Photography at the Whitney Museum of American Art