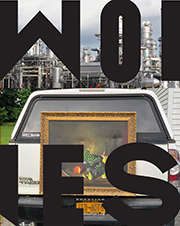 When a bowed, stringed instrument is played, the vibrations of certain notes can resonate at the same frequency as the vibrations of the instrument itself. The dissonant effect that results is referred to as a “wolf tone,” for its howl, and is almost universally characterized as an unpleasant deviance. For Maximilian Goldfarb, Nancy Shaver, and Sterrett Smith, however, the wolf tone has come to serve as a productive analogy for describing forces at work in a visual field and a model for their ongoing collaboration, Wolf Tones.

Having previously brought their practices into relation in gallery installations, here, they engage with the form of the book and the space of the page by presenting an orchestrated cacophony of their distinct artworks and the source imagery from which they draw inspiration. They are joined by contributors from the realms of art, architecture, art criticism, design, literature, media studies, music, and poetry who likewise explore the potentials of dissonance. Referencing landscape, temporality, sonic surpluses, improvisation, Éliane Radigue’s Naldjorlak, and more, this book addresses the artists’ collaboration as well as the acoustic phenomenon itself, reimagining the wolf tone as something to be celebrated.

Nancy Shaver is an artist who has been exhibiting work for more than 40 years. In 2018, she was included in Outliers and American Vanguard Art (National Gallery, Washington, D.C.), and One Day at a Time: Manny Farber and Termite Art (MOCA, Los Angeles). Other recent exhibitions include VIVA ARTE VIVA (La Biennale di Venezia, 2017); Nancy Shaver: Reconciliation (The Aldrich Contemporary Art Museum, 2015); and Robert Gober: The Heart is Not a Metaphor (Museum of Modern Art, 2014–15). Recent gallery exhibitions include Derek Eller Gallery (NYC), 12.26 (Dallas, TX), Atlanta Contemporary (GA), and Parker Gallery (Los Angeles). Shaver has received fellowships and awards from the Guggenheim Foundation, Anonymous Was a Woman, the Pollock Krasner Foundation, and the Louis Comfort Tiffany Foundation. A co-founder of Incident Report in Hudson, NY, Shaver also runs the store, Henry. She has been teaching in the Bard College MFA Program for more than 20 years.

Maximilian Goldfarb is an artist who produces projects in many forms. Goldfarb has completed past works with support from the Harpo Foundation, the Elizabeth Graham Foundation, the Pollock-Krasner Foundation, The Kaplan Institute, the Foundation for Contemporary Arts and the Experimental Television Center. He has participated in numerous exhibitions in venues including Sculpture Center, NY; Stadsgalerij, NL; Western Front, BC; White Columns, NY; The Drawing Center, NY; and Nina Freudenheim Gallery, Buffalo, NY. Goldfarb is interested in the generative potential of publication and radio transmission platforms. He is co-author of Architectural Inventions (Laurence King Publishing, UK, 2012), Deep Cycle (M49, 2010), Handbook for Human Machines (Pilot Editions, 2015), and Remote Viewing: 500 Tableaux (Publication Studio, 2017). Goldfarb is a co-founder of Incident Report in Hudson, NY. He serves on the Board of Directors of Wave Farm and is an Assistant Professor of Sculpture in the Department of Art at the University at Buffalo.

Sterrett Smith studied painting with Jim Gahagan, an American colorist who directed the Hans Hoffman School at Goddard College. She graduated from the San Francisco Art Institute with a BFA in painting in 1980, where she studied with Hassel Smith, Franklin Williams, Robert Hudson, and Angela Davis. She also studied in San Francisco with Helen Palmer, Diane Di Prima, Ian Grand, and Charles Ponce in the training of the intuition, the Kabbalah, and Somatic Knowledge. She was part of the group of artists and poets in Jess and Robert Duncan’s household and Diane DiPrima’s circle. She has been painting and making sculptures ever since.

Stan Allen is an architect and George Dutton ’27 Professor of Architecture at Princeton University.

Charles Curtis is a cellist.

Pradeep Dalal is a Mumbai-born artist and writer based in New York.

Anna Friz is a sound and media artist.

Julia Klein is an artist and the publisher of Soberscove Press.

Ann Lauterbach is a poet and essayist.

Catherine Lord is a writer, artist, and curator.

David Levi Strauss is the author of numerous books.

More than an archive, the book amplifies the concept of the wolf tone.... [I]t is the ensemble as a whole that makes the music here in the soloing of thoughts, the harmonizing of voices, and the clashing of tones. —Ann Collins, The Brooklyn Rail