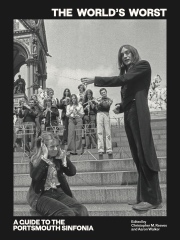 The World's Worst:
A Guide to the Portsmouth Sinfonia

In 1970, galvanized in part by the musical experiments of John Cage, Gavin Bryars, and Cornelius Cardew, students at Portsmouth College of Art formed their own symphony orchestra. Christened the Portsmouth Sinfonia, the primary requirement for membership specified that all players, regardless of skill, experience, or musicianship, be unfamiliar with their chosen instruments. This restriction, coupled with the decision to play “only the familiar bits” of classical music, challenged the Sinfonia’s audience to reconsider the familiar, as the ensemble haplessly butchered the classics at venues ranging from avant-garde music festivals to the Royal Albert Hall. By the end of the decade, after three LPs of their anarchic renditions of classical and rock music and a revolving cast of over one hundred musicians—including Brian Eno and Michael Nyman—the Sinfonia would cease performing.

The World’s Worst: A Guide to the Portsmouth Sinfonia, the first book devoted to the ensemble, examines the founding tenets, organizing principles, and collective memories of the Sinfonia, whose reputation as “the world’s worst orchestra” underplays its unique accomplishment as a populist avant-garde project. While seemingly a niche musical anecdote, the story of the Portsmouth Sinfonia engenders wide-ranging conversations that touch upon the legacy of interdisciplinary art pedagogy, the power of popular music, the investment necessary in order to work and learn together, and the effects of destabilizing canonization. The unorthodox journey of the orchestra unfolds here through interviews with original members and their publicist/manager, photographs, previously uncollected archival material including ephemera and internal documents, an essay by co-editor, Christopher M. Reeves, a foreword by Gavin Bryars, and more!

The collaborative publications and curatorial projects of Christopher M. Reeves and Aaron Walker deal with the generative possibilities of collective creative making.

Christopher M. Reeves is a Chicago-based research creator and PhD candidate in Art History at the University of Illinois at Chicago. He currently co-runs Flatland Gallery in Chicago. His essays have been included in such publications as Incite Journal, Counter Signals 2 (Other Forms), and Emergency Index (Ugly Duckling Presse). His dissertation is entitled, “Playing Music Badly in Public: Brian Eno, Experimentalism, and the Limits of the Non-Musician.”

Aaron Walker is an artist and programmer living in South Carolina whose projects often spring out of an interest in self-organized, artist-run culture.

What a teeming, joyful tribute to the Portsmouth Sinfonia this is. The World's Worst is a paean to art school experimentalism, to the creative value of amateurism and accidents, to the idea that conceptualism can also be anarchic and funny. ——Sukhdev Sandhu, director of the Colloquium for Unpopular Culture, New York University

The Portsmouth Sinfonia's sincere efforts to play the classics (on instruments chosen without the benefit of performer schooling) yielded nothing less than an as-yet-unsurpassed, unbridled joy for audience and musician alike. These key texts offer insight into the group dynamics and social and cultural relevance of the project.... ——Hannah B Higgins, author of The Grid Book

Our contemporary political leaders appear to be rank amateurs, but the Portsmouth Sinfonia’s story proves that challenges to professionalism (the good kind) have been around for several decades. With every passing year, the ensemble feels further ahead of its time—not only in its solicitation of trained and untrained musicians or its fluent facility with the cultivated and the vernacular, but also in the visionary path it found for a post-Cagean music that went through art school in its post-conceptual phase. This incredible collection brings together historical documents—liner notes, programmes, flyers, letters—with the invaluable remembrances of several members of the Sinfonia. It should serve as a guiding inspiration for every future shambolic disaster born of love. ——Benjamin Piekut, author of Henry Cow: The World Is a Problem

At a moment when a large portion of the UK—if not the world—seems hellbent on cutting out its heart to spite its face, it is crucial to return to histories like the Portsmouth Sinfonia. The historical accounts and remembrances herein are full of contradictions, pleasures, jokes and awkward moments between performers and audiences that always steer toward inclusion and veer from cynicism and pessimism. Reading this account of experimental collective endeavors and alternative forms of education has a decidedly populist bent. It reminds that populism wasn’t always petty racists and narcissistic crooks. At one time populism could be the ridiculously beautiful social responsibility of trying, no matter how imperfectly or full of folly, to reach that final note together with passion. ——Anthony Elms, Daniel and Brett Sundheim Chief Curator, Institute of Contemporary Art / University of Pennsylvania

Portsmouth Sinfonia was slipped surreptitiously into my teenage ears by Brian Eno on the warped X-mas song, "Put a Straw Under Baby," from his Taking Tiger Mountain (By Strategy).  Their way of being off was right on enough to inspire lifelong devotion, but I often wondered: to what? Now there's a sourcebook with more detail than anyone ever expected answering that question and much more.  The ramshackle texture, the historical context, the sense of humor, the egalitarianism, all the ways in which their world was one of radical potential—The World's Worst presents the Sinfonia in all its lumpy glory. ——John Corbett, author of Pick Up the Pieces: Excursions in Seventies Music

[The] World's Worst is a spirited collection of documentary ephemera, archival photographs, and liner notes that captures [the] Sinfonia's unlikely legacy as a soundtrack for a populist avant-garde. —Eileen Cartter, Ursula Magazine

[A]ccounts of their performances through the 1970s read like lists of superlatives — albeit more in the key of the title of this engrossing history of the Portsmouth Sinfonia. —Michael Andor Brodeur, The Washington Post

My only instructions were to write a 1000-1500-words review of this book that I am still reeling over as a revelation. —Craig J. Saper, Hyperrhiz